Ten years ago, the inner workings of an adolescent’s mind were published primarily in diaries or journals and safely stowed away in crawl spaces or under mattresses. Today, the diary has been unceremoniously replaced with the social networking site.

Don’t get me wrong, I think social networking has been good to me. From basic community living, we were then empowered by digital technology to become connected individuals and through social networks we now live in a networked society.

But, a part of my soul dies when a new and useless fad emerges that makes me question what sort of world we live in after millions of years of human evolution. Note that I say fad, because every part of me wants it gone as quickly as it arrived.

Yes, I’m talking about Selfies. What works me up is that a respected and reputable source such as The Oxford English Dictionary, recently pronounced “selfie” its word of the year for 2013. Additionally, selfies are now the most popular genre of photo in the digital space. Not to mention #me is the 3rd most popular hash tag devoted to self-shots.

This is how Urban Dictionary has defined “Selfies”. I love how ridiculous they have described it. Any part of this definition even sounds good? It truly boggles my mind.

I cannot help but think that we live in the age of narcissism. The constant taking of pictures of yourself doesn’t show confidence, rather it shows serious mental illness – a case of self-obsession that is disgusting to say the least. What has made us so over-indulgent in ourselves to become so selfish and clueless?

Selfies rarely offer any interesting information. My problem with selfies is that taking pictures of yourself all the time is a really weird, self-absorbing thing to do. Especially if you put them on the Internet and expect feedback. Don’t misunderstand me, doing this a little bit is fine, but making it your main activity on social media? It is just bizarrely solipsistic!

Endorsing a culture of selfies will bring us nothing good. What is absolutely absurd are the number of websites that need educating us when NOT to take a selfie. For example my favourites are from Buzzfeed’s 12 Selfies Taken In Places You Probably Shouldn’t Take Selfies and HuffingtonPost’s Selfie-Etiquette article The 8 Selfies You Must Absolutely, Positively Never Take. 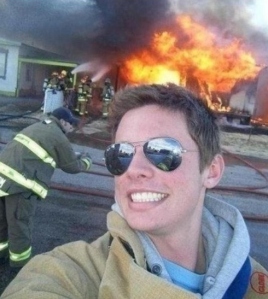 Yet, despite these “words of wisdom” freely available online people just don’t seem to get it. For example, the shameless ‘selfie’ taken by Barack Obama, David Cameron and the Danish PM at Nelson Mandela’s memorial is disappointingly light-weight. The article in The Telegraph headlines “If President Obama acts like this, don’t blame teenagers.” Or when the New York Post ran a story about a mystery woman who took a selfie with a suicidal Brooklyn Bridge jumper in the background, it made its way over the Atlantic where Daily Mail carried the story titled “Is this the sickest selfie of all time?”

If we all seem to love ourselves as much as we show it, then let’s start by giving ourselves some self(ie)-respect!